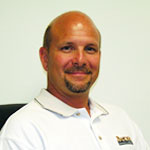 Todd Andrew, 50, started in the construction management business in 1986 and completed his bachelor of science in building construction at the University of Florida in 1987. In 1996, he launched Andrew General Contractors Inc. of Orlando and has since ridden the peaks and valleys of the market. He spoke recently with Sentinel reporter Mary Shanklin.

CFB: At what point did you realize the Orlando market was in for a sustained downturn?

It was probably June or July of 2008. We noticed our best year ever was in 2007 but, by the end of 2007, the phone wasn’t ringing as much. We still had a lot of work to carry us into 2008, but toward the end of 2008, bank financing dried up, and that negatively affected multiple projects around the state — and especially in Central Florida.

One day I was driving down the street and I got a call on a design/build office building we were doing on Semoran Boulevard. I found out that the bank, which had been very eager to finance that project for more than a year, pulled back and said, ‘We’re not offering any more loans.’ And that same situation seemed to start happening all over town with different projects.

What are the differences in the construction field from the bottom of the market until now?

What kinds of things did you do at the bottom of the market?

I went out to projects and swept the floors and emptied the trash. My field supervisors could handle metal stud framing, drywall work and framing. They had the ability to do a variety of work to keep busy.

How has workflow changed?

The work has picked up fairly rapidly, and it has created a little bit of chaos. We noticed that some subs [subcontractors] were having trouble keeping up with the work, and that’s still an issue. But it’s starting to level out a little bit. Subcontractors are having the biggest challenges finding qualified workers in HVAC [heating, ventilation and air conditioning], electrical and plumbing, and that’s across the state. It’s even worse in South Florida.

How do you find the workers you need?

You have to look pretty hard by building relationships with quality subcontractors who are able to recruit and maintain qualified skilled workers. And those relationships are built by treating people fairly and paying them on time, even during the downturn. If you treat people fairly and pay them on time, they are going to remember that and are going to try harder to at least staff your project.

Is that a big change from the downturn?

Yes. We were flooded with people who were hungry and needed business.

Are Florida colleges and universities hitting the mark to produce enough construction managers?

Yes — in management. The field positions are hard to find. In the field, the lack of qualified skilled workers is pretty maxed out right now.

Is the shortage of skilled labor driving up costs?

I think, realistically, prices from a raw-material standpoint are increasing, and I think labor issues are driving up costs a little bit.

How has your employee base changed?

How many at the bottom?

How competitive is the field now for Requests for Proposals?

We try to avoid the heavy bid market, but we were competing against five or six companies. Now we sometimes compete against three, so it has thinned out a little bit

Is there anything you miss about the downturn?

I played more golf and I got in good shape. I joined the masters swim class at the YMCA and got in the best shape I’ve been in.