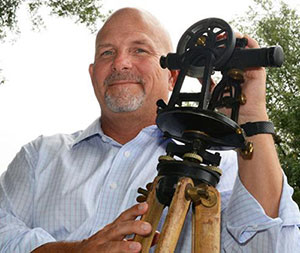 Todd Andrew began his career in a hole in the ground.

Yes, a literal hole in the ground. He was working in the bottom of one in 90-degree heat when he was in high school. He watched a successful looking individual drive up in a BMW, get out to clarify things for the workers and was gone in 10 minutes.

That’s when he knew he wanted to be the master of his own destiny.

Andrew wants to clarify — he drives a Ford F-150, not a Beamer. He worked for two general contractors for 10 years. In 1996, he became in charge of sinking or swimming when he started Orlando-based Andrew General Contractors Inc. in the den of his house.

Timing wasn’t the best. His wife had just quit her job as a school teacher and given birth to their first child. There was zero money coming in. Andrew’s nerves were wracked.

Failure was not an option.

The phone was silent for a day and half. Then it rang. It was an old flag football buddy at Lucent Technology who needed a guard shack constructed.
Andrew said he’d be right there.

Fast forward 20 years later, and Andrew General Contractors has completed eight projects for military contractors in Central Florida Research Park, totaling over $3 million and over 75,000 square feet in the past year and a half. In addition, the company has worked on retail projects in Nona Park and completed the 21,422-square-foot Challenger One office project in Research Park.

Here’s what else Andrew had to say about his successes and challenges:

From that guard shack up until now, what insights can you offer? Good contacts are important. Working for people who treat you fairly and with respect — that flows downhill to the subcontractors and the workers. Our focus was trying to keep repeat business, corporate clients and commercial real estate folks. Being trusted and reliable means making sure we delivered on what we were expected to provide. You maintain repeat business with persistence, assertiveness and communication skills.

What are you working on right now? We have 10 jobs underway. We have a retail building in Lake Nona underway for Equinox Development [Properties Inc.]. We just broke ground on the Orlando Union Rescue Mission — they moved to West Colonial Drive. We are working on the Phase 1 portion, which is all new buildings. We have two other buildouts in Williamsburg for Equinox Development, one for a chiropractor and one for a realty office.

Tell us about your work with military projects: There had actually been a brief slowdown [in military project work] during the election to see what Trump is going to do. My sources say it will pick back up toward the end of the year. It’s an exciting arena to do construction in — you’re working for high-tech companies that specialize in simulation technology. We believe Orlando is the hub for that.

What are some hard lessons you’ve learned? The hard lessons for me as a business owner stem from employee turnover and bad hiring. I would really make sure you feel comfortable with the person and do a background check before you hire them.

Who is your competition? Oh, do I have to say? I would say Orlando is saturated with construction. There is quite a bit of competition. It’s an accurate statement to say all of the largest contractors in the U.S. have offices here. Our clients have high expectations to deliver projects on schedule, under budget and high quality. There are many well-respected competitors that I admire. Did I sufficiently avoid the question?

What keeps you up at night? Staffing and the feeling that maybe you’ve let a customer down — no matter how minor it is. When you’re working for someone else, it’s so much easier to be objective. When you’re the business owner, it’s easy to get wrapped up in that. At the end of the day, some outcomes are out of your control.

Fill in the blank: How I ____ to affect an outcome? How I wasn’t afraid to ask a dumb question four times in a roomful of people. That saved our company a lot of money. People don’t always come out with the correct information and sometimes they’re confused. As a general contractor you need to understand what the truth is and how best to take corrective action. I’ve been in meetings where I’ve asked what I thought was a dumb question and by the third or fourth time I get the answer and I’m so glad I asked.

What’s an example? It might have to do with estimating a job. Did the estimation include the right size wire for the service? Why is the number so low? We called the electrician and asked him. Turns out he left all the wire out of the entire estimate. Had we turned that proposal in, it would have cost us $50,000.

What brings you joy in this job? I truly love it when a plan starts to come together. You can feel the positive momentum. It’s exhilarating to know you’re delivering financially and meeting the customer’s expectations.